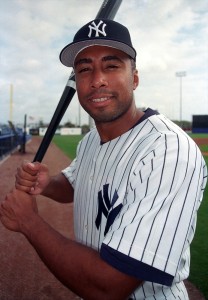 Bernie Williams, who was the center fielder for the Yankees for 16 seasons, will deservedly have his No. 51 jersey retired by the Yankees tonight. He was an integral part of Yankees teams that won the World Series in 1996, 1997, 1999 and 2000.

He was an All-Star five times, won the Gold Glove award twice and one on Silver Slugger award. He won the batting crown with his .339 batting average in 1998, and he also scored 101 runs, hit 30 doubles, had 26 homers, drove in 97 runs, and had a career-high .575 slugging percentage. During the seven-year prime of his career (27-33), he drove in 100 or more runs five times, he had an average of .307 or better seven times, he scored 101 runs or more seven times and hit 25 or more homers five times.

According to James Smythe, Bernie “Bern Baby Bern” Williams is third on the franchise list in doubles, fifth in hits, fifth in walks, sixth in runs scored, sixth in offensive WAR, seventh in homers and seventh in RBI. He was someone who came through repeatedly under pressure and could be counted on to play everyday. He played the game the right way and had a number of clutch hits in the playoffs. He had two walk-off homers in the playoffs and his 80 RBIs in the postseason are the most of all-time.

There is a Core Fore right now, but it should really the called the “Core Five” because those four World Series championships wouldn’t have happened without Williams.

The Yankees announced that Derek Jeter, Jorge Posada, Paul O’Neill, Mariano Rivera, David Cone, Willie Randolph and Joe Torre will all be part of the ceremony.

During his speech he said he wished he could be playing right now and then said maybe not. He said the 2015 version is more suited for guitar than for playing baseball. He also thanked Joe Torre for being there for him. Williams also thanked his teammates who were on the field with him for being part of the best years of his life.

He fittingly thanked the fans at the end and said that the Yankees fans are the best fans in the world. He thanked the fans for embracing him as a son as he makes his home in New York. Wiliams is happy that he is a Yankee for life. Nobody will ever wear his iconic No. 51 again.

Here is his walk-off homer against the Baltimore Orioles in Game 1 of the ALCS in 1996: