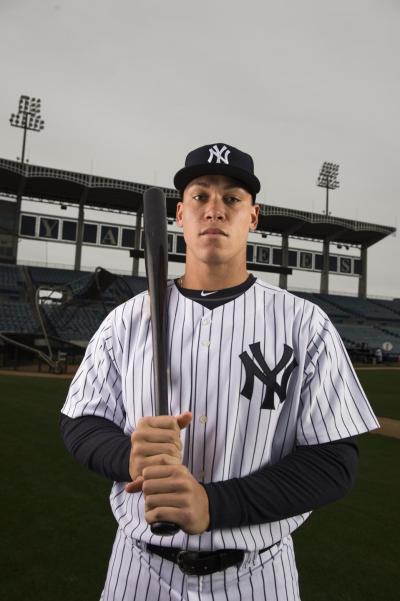 The Yankees play their first game of spring training on March 2 against the Detroit Tigers in Tampa, which is in only 22 days. About three weeks before spring training officially begins, the Yankees announced on Friday that outfielder Aaron Judge, shortstop Jorge Mateo and starting pitcher James Kaprielian will be in big-league camp.

Mateo (20) and Kaprielian (21) are young highly rated prospects but still both need at least one more year in the minors, with Kaprielian needing at least two since he was drafted last season. They are worth keeping an eye on based on what Kaprielian did in college at UCLA and with the Staten Island Yankees during his few appearances with them and based on what Mateo did last season with Single-A Charleston and Single-A Advanced Tampa.

Mateo, who was ranked the team’s No. 3 prospect after the 2014 season and has been labeled untouchable by the organization, had a .278 average with two homers, 40 RBIs, 82 steals, 98 strikeouts and 43 walks in his 117 games across two levels. He also made 30 errors in his 99 starts at shortstop last season. He will be valuable if he can continue to steal bases at the rate that he is, cut down on his strikeouts and not commit errors as frequently.

Mateo is the prospect in the Yankees organization with the best ability to steal bases, which is something that either the Yankees will benefit from or another team will benefit from in a trade. It is a positive that he was able to have a .321 average in 84 at-bats with Single-A Advanced Tampa, which is the highest average he has had in his four seasons in the minors.

His defense needs improvement, but it is not unfixable, according to a report on Fangraphs. The report said that Mateo “isn’t the super-smooth Gold Glove type, so he’ll need to continue to hone his instinct and footwork, but the tools are there to be a solid defender.” Mateo will likely improve defensively with repetition, and not to compare Mateo to Derek Jeter, but when Jeter was in Single-A Greensboro he made 56 errors in 1993.

Kaprielian, who the Yankees drafted with the 16th pick of the first round in 2015, pitched in seven games in the rookie league in 2015 and then was called up towards the end of the season to pitch with the short season Single-A Staten Island Yankees. In his three starts with Staten Island he dominated the New York Penn League competition as he had a 2.00 ERA in 9 innings pitched with a 1.111 WHIP, 12 strikeouts and only two walks. The possible future No. 3 starter for the Yankees will likely begin the season with Staten Island.

The 6’4″ righty was drafted after his junior season at UCLA, and in his three seasons as a Bruin he went 16-10 with an outstanding 2.06 ERA over 66 appearances (31 starts). He was named to the All Pac-12 first team in his sophomore and junior seasons. In his stellar junior campaign, he was named a second team All-American by Collegiate Baseball, he led the Pac-12 in strikeouts (114) and wins (10), pitched seven or more innings in seven of his 15 starts and to top it off he impressively threw nine no-hit innings while striking out 10 against Arizona.

Judge is the player out of the three who is most likely to have an impact in the Bronx during the 2016 season. Judge, who at 6’7″ and 275 pounds looks like a defensive lineman and has been compared to Giancarlo Stanton, was drafted with the 32nd pick of the first round out of California State University Fresno in 2013.

The outfielder hit .255 with 20 homers, 72 RBIs, 63 runs scored and a .448 slugging percentage combined in 63 games with Double-A Trenton and Triple-A Scranton. He struggled once being called up to Scranton since his stats at that level were a .224 average with eight homers, 28 RBIs and a low .373 slugging percentage. This proves that he needs more time at Triple-A to figure out the pitching that is close to major league caliber. However, he has a lot of upside and should be ready to be called up as an injury replacement or to give Carlos Beltran or Alex Rodriguez a few days off in June or July.

This is what MLB.COM said about Aaron Judge: “He scuffled (in Triple-A), but even though he profiles as a potential slugging run producer, he’s also shown an ability in the past to make adjustments. Once Judge does that, he should be ready for his New York debut,” said the write-up. “Built along the lines of Giancarlo Stanton, Judge has similar strength, leverage and huge raw power. He focused on working counts and the middle of the field during his 2014 pro debut, but he started to turn his right-handed swing loose more often last season … An excellent athlete for his size, Judge has average speed and a strong arm.”

He will need to figure out the improved off speed pitchers that the starters throw at Triple-A, and once he does that he should be ready to contribute. He has so much power from his massive frame that he should be able to help the Yankees win some games this year. Judge is currently the eighth best outfield prospect in baseball and he will get to prove that lofty ranking starting on March 2.

Judge is one of the prospects that Brian Cashman has deemed untouchable as the Yankees have valued their minor league system more recently, and the others were Mateo, Luis Severino and Greg Bird. Judge could play an important role at some point with his bat and Severino will be significant as he will be one of the starters in the pitching staff to begin the season. Judge, Mateo and Kaprielian will get valuable experience with the Yankees veterans as well as against major league competition during spring training.