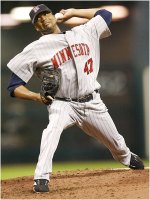 Francisco Liriano pitched the first no hitter of the season for the Twins on Tuesday.  He was an intriguing pitcher for the Yankees to acquire after Cliff Lee went to the Phillies and Andy Pettitte retired, and now his name comes to the forefront again.
Against the Tigers, on May 4th the Yankees lost a game where Max Scherzer flat out dominated and they were not able to play small ball in order to score any runs in the 4-0 loss.  It was only the second two game losing streak of the season.  Freddy Garcia allowed one run in the second, and three in the third, but bounced back to pitch effectively for the next four innings.  For his last two starts Garcia has pitched more like the average pitcher that he has been the last two years, and less like the excellent pitcher that he was with the Mariners early in his career.
The offense needs to figure out how to put some runs together because they only scored two runs when they faced a mediocre Brad Penny, and then got shutout against Scherzer.  They are a little too reliant on the home run, having scored the highest percentage of their runs in the league off the long ball.  However, it is likely that they will be able to capitalize during a matinee game when they face Rick Porcello, to close out the series against the Tigers.  He has pitched better recently after a sluggish start to the season but he has struggled to live up to expectations.  The Yankees are only hitting .255 collectively against Porcello in a limited number of at bats.  The Yankees should be able to put some runs on the board off a young pitcher still trying to find himself.

Bartolo Colon is pitching brilliantly to start the season but his history with injuries suggests that this might not be able to last the whole season.  Since Phil Hughes will be out recovering from his shoulder inflammation injury for six to eight weeks, and possibly longer, it will be necessary for the Yankees to explore all options for a pitching upgrade.  Even though Colon did not pitch at all last season it seems like he will be more reliable than Garcia because of his command and confidence on the mound.  Colon has not shown any signs of slowing down, continuing to show stellar control during his first start in May where he did not allow a single walk, so it seems like he might be trusted to stay in the rotation the whole season.
The no-hitter by Liriano was by far his best start of the season since he now has an ERA of 6.61 with more walks than strikeouts.  However when healthy he has proven that he has the ability to dominate American League hitters like he did last season and in 2006, when he was an All-Star.  He is a slight injury risk so the Yankees should wait until the middle of July to see if he is able to stay healthy and pitching effectively.  Liriano is only 27, so he is entering the prime of his career and there is a chance that the injury bug is behind him.
Garcia could be effective as a long man out of the bullpen if the Yankees do acquire Liriano after the trade deadline.  If the Yankees can get his services without having to give up the stars of their minor league system in Miguel Montero, Manny Banuelos, Dellin Betances or Andrew Brackman they should make the deal.  If forced to give up one of the “Killer B’s” I would give up Brackman since he seems to have the least potential for excellence.  If they have to include Ivan Nova then they can call up somebody like Hector Noesi to take his spot.  The Twins might be encouraged to make a deal like this, for Nova and a position player because they would not want to lose Liriano for nothing.  A rotation of Sebathia, Liriano, Burnett, Hughes and potentially Banuelos next season would be very effective.
A factor in the Yankees favor is that Scherzer is from Morristown, New Jersey, which is not far from the Bronx, so even though the game is in Detroit, he will likely have a lot of nerves facing his hometown team.