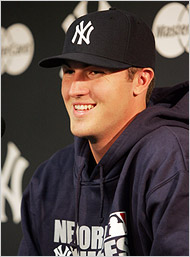 Tonight’s game will be the first contest of a 10-game west coast trip that will go from Seattle, to Oakland and then to Anaheim.

The last time the Yankees faced the Seattle Mariners they lost two out of three games in the middle of May. The shocking part about that series loss is that the only game that the Yankees won was the game that Marines ace, Felix Hernandez, was pitching.

The Yankees have gone 9-9 since that series loss to the Mariners at Yankees Stadium. However, before this upcoming series in Seattle, the Yankees swept the Indians in The Bronx.

Seattle is coming into the series having lost three out of their last five games. They have allowed four runs or more in four of their last five games coming into this series. Since the Mariners have a 26-34 record, and are tied for third place with the Angels in the AL West, the Yankees need to take advantage of facing an inferior opponent. It will not be a successful series unless they can win three or four games.

Another reason that the Yankees should be able to win the series is that they are facing pitchers, besides King Felix, who are on the downside of their careers. The first three starters that they will face have had success (especially Harang and Saunders) with the Reds, Tigers, and Angels, but they are all struggling this season.

The offensive star so far for the Mariners has been Kendrys Morales. He has a .307 average, eight homers and 35 RBI. In 31 games, he has a .330 career average against Yankee pitching, so the Yankees will want to pitch around him at times.

In injury related news, it was announced that Derek Jeter is set to have his injured left ankle examined by Dr. Robert Anderson next week. After being examined, he will hopefully be able to increase his baseball activities.

Since CC Sabathia pitched in the final game against Cleveland, he will miss this series. Here are the pitching matchups for the series in The Emerald City.

Jeter on the jumbotron

Corban Joseph in the minors with AA Trenton.

After sweeping the three game weekend series against the Royals in Kansas City, the Yankees will now try to win both games of today’s double header against the Cleveland Indians in Cleveland. These are makeup games from a rainouts in April.

The Yankees are currently one game ahead of the Boston Red Sox for first place in the AL East after having won their past five games (they also won the final two games against the Rockies). With both wins of the double dip they could stretch the winning streak to seven.

It is not ideal that they will now have to play a double header because the Yankees have very little quality depth as a result of all of the injuries. However, they have proven to be a resilient team as a result of the replacements playing winning baseball.

The team will utilize the new 26th roster spot for the double header as Corban Joseph, who is making his big league debut, will play first base in the first game, giving Lyle Overbay a needed day off, and second base in the second game, giving Robinson Cano a needed breather. Cano will DH is Game 2. Joseph’s natural position is second and  has a .270 average with four homers for AAA.

Joseph’s time with the big club will be short lived as he will have to leave the luxury of the Yankees and go back to AAA after the game.

Alberto Gonzalez, who played 11 games for the Cubs this season, will also be making his Yankees debut as he will be playing shortstop in place of Jayson Nix. Nix was playing instead of Eduardo Nunez (on the DL with a left ribcage tightness) who was playing as a result of Derek Jeter being on the DL.

The Indians are also in first place. They are tied with Tigers with a 20-15 record. Today is an anomaly in Cleveland, in terms of double headers, as one admission will get fans into both games. This will be like the double headers that were regularly scheduled more than 20 years ago.

Vidal Nuno will be making his first major league start in Game 2. in his only appearance of the season, against the Astros, he threw three shutout innings in relief. You never know what you will get out of rookies making their first start, but Nuno had a 1.54 ERA in four starts for AAA Scranton. He also had an outstanding 26 strikeouts to only two walks.

Here is the lineup and pitching matchup for Game 1:

Game 2 will start about 20 minutes after Game 1 finishes.