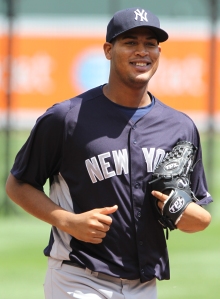 Ivan Nova during spring training in 2011 during a game against the Orioles.

The Yankees, who are 55-42, have a 6.5 game lead over the Toronto Blue Jays and 7 game lead over the Baltimore Orioles for first place in the AL East. They will continue their road trip with a four-game series in Arlington at Globe Life Park against the Texas Rangers. The Yankees have gone 8-3 in their last 10 games and have the second best record in the American League.

The Rangers are a mediocre team this year as they have a 47-50 record and are 4.5 games out of the second wild card spot. There are rumors that the Rangers could look to add Cole Hamels before the trade deadline. Jayson Stark has reported that the Rangers and Dodgers are in the lead to acquire Hamels. However, the Rangers still don’t know who will start in Wednesday or Thursday’s game.

Texas is reportedly considering an extra left-handed starter for this series to match up with the many left-handed bats that the Yankees have. The Yankees have not announced a starter for Tuesday’s game. The plan is for either Adam Warren or Chris Capuano to throw three or four innings, according to Joe Girardi, and then to have the other come on in relief.

Today is Alex Rodriguez‘s 40th birthday and he has performed better this year than anyone could have expected. He hit three homers in a game for the first time since 2010 during Saturday’s win over the Twins and is seventh in the league with his 23 homers, is tied for 10th in the league with his 58 RBIs and his .914 OPS is fifth in the league. He has been a key offensive force in the middle of the lineup and the Yankees will need him to stay healthy and productive the rest of the season.

Rodriguez’s OPS is higher right now than it has been since the 2008 season. He is also having his best season overall offensively since the 2009 season, which is the last time the Yankees won the World Series. Part of his return to form is due to being a full-time DH and part of it is due to him being completely healthy this season.

The Yankees will look to win their seventh consecutive series before ending their long road trip against the Chicago White Sox. Here are the pitching matchups for this series.