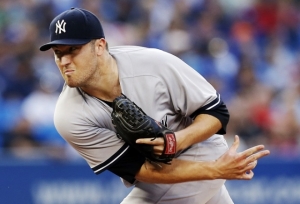 Phil Hughes, who was one of the most highly rated and one of most anticipated prospects in the Yankees’ minor league system before being called up in 2007, is now a Minnesota Twin after signing a three-year, $24 million contract with the small market team.

He should see more success with Target Field as his home park and pitching in the American League Central as he had 3.88 ERA in away games last season. His overall ERA was 5.19, and his ERA at Yankee Stadium was 6.32, which is the main reason that the Yankees did not offer him a qualifying offer.

Phil Hughes had a 4.54 ERA in 780.2 innings with the Yankees. That is the third highest ERA in team history among the 88 pitchers to throw at least 500 innings for the Bronx Bombers.

The Minneapolis Star Tribune said that the deal is expected to be announced this week. A physical is now the only thing that is preventing the deal from being official. Another stat that will help Hughes’s transition to Minnesota will be his 1.89 ERA in 71 1/3 innings against the Chicago White Sox and Cleveland Indians, who are in the AL Central.

He showed some potential to be a number two or three starter earlier in his career, which is what the Twins are expecting him to duplicate away from the pressure cooker that surrounds the Bronx. As recently as the 2012 season, Hughes picked up 16 wins and had a decent 4.23 ERA in 191.1 innings. However, his best season as a starter came in 2010, where he was 18-8 as a 24-year-old, and had a 4.19 ERA in 176.1 innings. He was an All-Star that season after pitching much better in the first few months than after the All-Star break.

It is unfortunate that Hughes did not pitch a little better last season, since he was 4-14 and the Yankees missed the playoffs by 6.5 games. If he would have pitched a little closer to how he did in 2012 they might have made the playoffs or finished a game or two out of the Wild Card. If that would have happened they could have offered the qualifying offer and received a high draft pick in return. He likely would have declined the qualifying offer in this scenario.

Given his 3.88 ERA in away games there is a definite possibility that Hughes could become an All-Star again for the Twins. A.J. Burnett, who was a starter for the Yankees from 2009-2011, had an ERA of 5.15 for the Yankees in 2011, but the next season for the Pittsburgh Pirates he ERA was a very respectable 3.51. Hughes, who is nine years younger than Burnett, could follow a similar path as that of the former post-game pie thrower.

In other Yankees news, Brendan Ryan has been officially brought back to the team as a back-up shortstop. He received a two-year, $5 million contract with a club and player option for a third year. With incentives, this contract could be worth $10 million.

It is surprising that he was not given a one-year deal based on his very limited hitting ability. He only has a .217 average over his last four years. However, he is one of the best defensive shortstops in baseball and can be counted on to prevent runs defensively and be a suitable fill-in for Derek Jeter.

This contract signifies that the Yankees organization does not have much confidence in Eduardo Nunez. He had the opportunity to be the starting shortstop last season, as a result of Derek Jeter’s injury, but he was placed on the disabled list on May 12 because of soreness in his left rib cage. He also was rated highly as a minor leaguer, but has had a history of making too many errors and making plays that prove that he has a sub-par baseball IQ.