After sweeping the Chicago White Sox, who are in last place in the American League Central, the Yankees will now conclude their 10-game home stand with a four-game series against the Boston Red Sox. It is always a big series when they play their rivals to the north, but this series will have even more significance because they are only 2.5 games out of the wild-card.

The Red Sox have won five out of their past six games. They have virtually looked up the division (the Yankees have a chance since they play them seven more times) and are now playing for home field advantage in the playoffs. Ryan Dempster hit Alex Rodriguez on Sunday Night Baseball in the last game that the two teams played and there has been some talk of possible retaliation by the Yankees. The best retaliation that the Bronx Bombers could show at this point is to win three our four games in this series.

Since the Yankees last played the Red Sox they have gone 11-5. It is possible that the game that they came back to win after A-Rod was intentionally hit in the second inning ignited the team but it is also likely that the health of Curtis Granderson and Derek Jeter and continued dominance of Alfonso Soriano and Robinson Cano has spurred the much needed hot streak.

With their game tonight, the Yankees start a streak of 14 games against division rivals. They will play the Red Sox, Baltimore Orioles and Toronto Blue Jays during these crucial games. A pitcher that will be key during this stretch is Ivan Nova. That Yankees would not be where they are right now without him. Has a 2.28 ERA in 12 starts since returning from the minors on June 23. The command of his curveball and fastball have been much improved. He will start tonight against the Red Sox.

Jake Peavy, who has never defeated the Yankees in his career, will pitch for the Red Sox tonight. He has pitched very well since coming to Boston from the White Sox in the beginning of August.

After a 4-0 record in August, Nova was named the American League pitcher of the month. August also included his first complete-game shutout of his career.

Many offensive players have been playing well of late for the Yankees. Robinson Cano is four for his last eight and going back further has a .367 batting average since August 14. He has driven in 18 runs in the past 20 games. Brett Gardner, who has been a catalyst at the top of the lineup, has a .360 average over the past week with five doubles. Eduardo Nunez, who is not playing tonight, has an outstanding .444 average over the last seven days.

If the Yankees can win three out of four games it would put them in great position going into their final 19 games of the season. 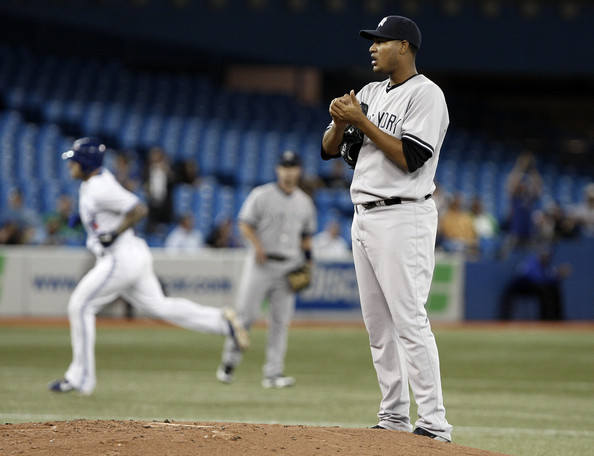 Nova pitching in a game at the Rogers Centre in Toronto.

The Yankees (64-59) start a four-game series at Yankee Stadium against the Toronto Blue Jays today at 1:05 p.m. That will be the first game of the doubleheader. The second game will start at 7:05 p.m.

The last time the Yankees played a doubleheader was on June 19 against the Los Angeles Dodgers, also at home, and they split those two games with the Bronx Bombers winning the afternoon contest. However, the Yankees do not at all resemble the team that that took the field that day.

Over their last eight games, the Yankees have won six out of their last eight games, which includes winning two out of three games at Fenway Park over the weekend. This includes the dramatic game on Sunday in which the Yankees won 9-6. Alex Rodriguez was hit on purpose  in the top of the second when the count was 3-0 after Ryan Dempster had tried to hit him earlier in the count. There is no place in the game for intentionally throwing a 90+ MPH fastball at a batter even if they in middle of a steroid controversy off of the field.

Joe Girardi, for good reason, argued with the home plate umpire like he has not before because the ump did not throw Dempster out of the game. The umpire did throw Girardi out of the game. This seemed to propel the Yankees offense as they scored two runs that inning. A Red Sox player was not hit in retaliation, but later in the game, A-Rod hit a homer to deep center, which was a great way to get back at Dempster. Brett Gardner would follow that with a big three-run triple that gave the Yankees a 7-6 lead.

It makes sense that CC Sabathia did not throw at a Red Sox player because he would have unfairly been thrown out of the game and the game was too important for the Yankees to win.

The Blue Jays come into the series having lost two out of their past three games to the Tampa Bay Rays. Going further back, Toronto has only won four out of their last 10 games. After receiving Josh Johnson, Mark Buehrle and Jose Reyes in an offseason trade with the Miami Marlins the Blue Jays were expected to contend or even win the AL East. However, Reyes has been injured for much of the season and Johnson and Buehrle have disappointed, which has led to their 57-67 record.

The Yankees are currently 6.5 games behind the Oakland Athletics for the second Wild-Card. That makes sweeping this four-game set against Toronto very important if they want to have a chance at leaping ahead of the Kansas City Royals, Cleveland Indians, Baltimore Orioles and Oakland Athletics.

A stat that has led to Toronto’s struggles has been that none of their starters for this series has an ERA below 4.29 for the season. For the Yankees, Ichiro Suzuki is only three hits away from 4,000 combined hits between the Orix Blue Wave in Japan, the Seattle Mariners and the Yankees. In an obvious pick, Alfonso Soriano was named the AL Player of the Week, on Monday, based on hitting .484, hitting five homers and driving in 18 runs in the previous week.

Here are the pitching match-ups for the series: